Articles and images related to sexuality for the over 70’s. Recommended for all – see below

Archer Magazine is an independent journal of sexual diversity, started in Melbourne in 2013. The print edition is published twice-yearly, and takes a snapshot of Australia’s attitudes to sexuality, gender and identity at the time of publication. 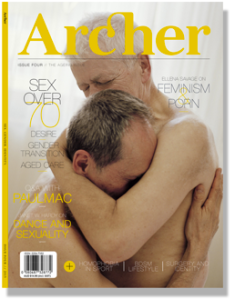 Why does society assume older people have no sexual identity, desire or need for self-discovery?Archer’s groundbreaking fourth issue challenges this assumption.Featuring:* Sex over 70 by Doreen Wendt-Weir
* Gender transition by Sally Conning
* Sex in aged care by Dr Catherine Barrett
* Dance and sexuality by Janet W. Hardy
* Naturism by Sam Twyford-Moore
* Bisexuality and stigma by Sally Goldner
* Q&A with Paulmac
* Homophobia in sport by Gus Johnston
* Disclosure and body diversity by Phoebe Hart